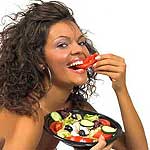 Breast cancer risk can be decreased by up to 38% through lifestyle factors including maintaining a healthy weight, exercising regularly, and eating a healthy diet. In fact, less than 10% of breast cancer appears to have a genetic basis.

For prevention of breast cancer, limiting alcohol to one drink a day (5 ounces of wine, 12 ounces of beer, or 1.5 ounces of spirits) is one of the most important things that you can do. In addition, a plant-based diet loaded with at least two cups a day of a variety of produce is beneficial.

According to the American Institute for Cancer Research, “no single food or food component can protect you against cancer by itself. But scientists believe that the combination of foods in a predominantly plant-based diet may. There is evidence that the minerals, vitamins and phytochemicals in plant foods could interact in ways that boost their individual anti-cancer effects.

A recent study in mice suggests that walnuts may also play a role in breast cancer prevention, but these findings need to be confirmed in humans.

There is also a growing body of research suggesting that curcumin, one of the active components of curry, may play a role in both the treatment and prevention of various types of cancer including breast cancer.

Excess belly fat seems to be particularly harmful, most likely because of its effects on inflammation and its association with elevated insulin levels, so if you tend to be more “apple shaped” and carry extra weight in your belly, it is especially important to lose weight, exercise regularly, and limit refined grains, sugar sweetened beverages, and added sugar in your diet.

In general, the emphasis should be on whole foods rich in anti-oxidants. Vitamin C may need to be supplemented in some cases if not enough is consumed in the diet.

Your lifestyle can prevent cancer