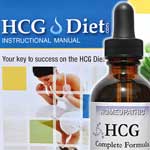 What is the HCG Diet? – Ultra-low-calorie weight-loss diet usually less than 500 calories taken along with low dose HCG, which is Human chorionic gonadotropin or human chorionic gonadotrophin (hCG) is a glycoprotein hormone produced during pregnancy that is made by the developing embryo after conception and later by the syncytiotrophoblast (part of the placenta).

A controversial usage of hCG is as an adjunct to the British endocrinologist Albert T. W. Simeons. Simeons, while studying pregnant women in India on a calorie-deficient diet, and “fat boys” with pituitary problems (Frölich’s syndrome) treated with low-dose hCG, claimed that both lost fat rather than lean (muscle) tissue.

He reasoned that hCG must be programming the hypothalamus to do this in the former cases in order to protect the developing fetus by promoting mobilization and consumption of abnormal, excessive adipose deposits.

Dr. Albert T. W. Simeons was a gifted endocrinologist when endocrinology was at its infancy stages in Medical Science. He lived from 1900 to 1970 & was born in England, but schooled in Germany. After a brief stay in Africa due to his desire to find a cure for Tropical Diseases, he went to India in 1930. While in India he was awarded the Red Cross Order of Merit for his discoveries in new methods that could lead to a cure for Malaria.

Origin of concept of HCG Diet

While in India he also became involved with an endocrine disorder that was unusual. This disorder was attributed to the pituitary gland would cause extreme obesity while delaying puberty in young teen aged boys. Dr. Simeons believed that if Human chorionic gonadotropin was administered in very low doses while eating a very low calorie diet extreme weight loss occurred. Scientific consensus does not support Simeons’s claims finding no weight loss attributable to the use of hCG.

Dr. Simeons lived in India for 20 years then moved to Rome, Italy and opened his practice focusing only on the perfection of the HCG Weight Loss Protocol. While in Europe his protocol gained great fame among the social elite, and royal families. As the onset of Hollywood came into being many movies stars would inquire of his assistance. Dr. Simeons would turn most of them away because his protocol allows only the excess fat called adipose to be released, not the structural fat. Therefore one cannot get skinny on the HCG Protocol. Once all the adipose is released by the system the weight loss naturally stops.

In 1954 Dr. Simeons published his manuscript: “Pounds & Inches a New Approach to Obesity”. In this manuscript Dr. Simeons explains although the nature of obesity is very complex there are 3 main causes for it:
– Genetic disposition
– Glandular disorders
– Culture

It is the resulting imbalance that each of these causes that allows adipose to collect in the body. The HCG Protocol allows balance to be restored. Bodies then naturally remember how to burn any excess fat that we would consume. It is for these reasons that the HCG Protocol has been deemed “The Weight Loss Miracle Cure”.

After Simeons’ death, the diet started to spread to specialized centers and via popularization by individuals, such as the controversial author Kevin Trudeau, famous for promotion of alternative therapies and treatments.

The controversy proceeds from warnings by the Journal of the American Medical Association and the American Journal of Clinical Nutrition that hCG is neither safe nor effective as a weight-loss aid.

A meta analysis found that studies supporting hCG for weight loss were of poor methodological quality and concluded that “there is no scientific evidence that HCG is effective in the treatment of obesity; it does not bring about weight-loss or fat-redistribution, nor does it reduce hunger or induce a feeling of well-being”.

Controversy about, and shortages of, injected hCG for weight loss have led to substantial Internet promotion of “homeopathic hCG” for weight control. The ingredients in these products are often obscure, but if prepared from true hCG via homeopathic dilution, they contain either no hCG at all or only trace amounts (according to the principles of homeopathy this remedy would in any case cure anorexia, not obesity). Moreover, as per principles of homeopathy, this HCG homeopathic medicine was not proved on healthy human beings.

The United States Food and Drug Administration has stated that this drug is fraudulent and ineffective for weight loss. It is also not protected as a homeopathic drug and has been deemed an illegal substance.

According to the studies noted above, the weight loss indicated by individuals on an “hCG diet” can be attributed entirely to the fact that such diets prescribe a consumption rate of 500-550 calorie per day, or approximately one quarter of what is commonly accepted as the daily recommended value for a male adult of average build and activity. Further, double-blind studies note no decrease in appetite by those taking hCG versus individuals on placebos and have offered no evidence that individuals taking hCG are more likely to lose fat than lean tissue. Long-term results caution that unlike individuals participating in a diet of, for example, 1100 calories per day, those on a 500 calorie per day diet are unlikely to develop more appropriate eating habits and will gain weight more quickly after the diet has completed.

I am sure this compilation would help the readers about HCG Diet and Homeopathic HCG.