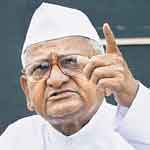 First of all, I would like to accept that whatever I am going to say here it is a very small and limited knowledge I have about our existing government and law system. In last 25 years of my life after the college days, I had certain mixed experiences of our system. As per my understanding, our laws and regulations are well made but we do not have will to follow and implement them properly.

In 2000, I learned ISO 9001:2000 and completed my certification in internal auditing as well. During that period, I learned some facts related to statutory requirements and regulations concerning our healthcare systems.

In our system, I would say we have all kinds of checks and balances and if we follow them seriously, truthfully, honestly and with uprightness of our characters, I think, there would be no corruption.

Fortifying the system is one definite requirement that Anna Hazare has initiated, and secondly, we need to raise our standards of being human, our character, our honesty, our truthfulness and many other positive words can be suggested; however, the most important is how truthful you are with yourself.

In last couple of days, we have seen many debates on TV on JanLokPal Bill, and no one has any concrete solution for the existing crisis.

Recently, Arundhati Roy – an author and political activist – attacked Anna Hazare’s anti-corruption movement and slammed the Jan Lokpal Bill. “While his means may be Gandhian, Anna Hazare’s demands are certainly not,” she mentions.

“Contrary to Gandhiji’s ideas about the decentralization of power, the Jan Lokpal Bill is a draconian, anti-corruption law, in which a panel of carefully chosen people will administer a giant bureaucracy, with thousands of employees, with the power to police everybody from the Prime Minister, the judiciary, members of Parliament, and all of the bureaucracy, down to the lowest government official.” The agency itself would hence become “an independent administration, meant to counter the bloated, unaccountable, corrupt one that we already have. Two oligarchies, instead of just one.”

Arundhati Roy is not the only high-profile public figure to have spoken against Anna Hazare and his demands. Another Roy, leading Right-to-Information activist Aruna (Aruna Roy), reportedly urged Anna Hazare and his aides to work with – rather than against – democratic institutions. Aruna Roy was a key figure behind the 2005 Right to Information Act, a major piece of legislation that allows citizens to request information from almost all government bodies.

Well, I would say here that the need for this kind of reform was envisaged 42 years back. In last 42 years, no political party has shown its will to frame it as a law. It means 42 years before we had many corrupt, unjust people those were not honest to bring this law for their own personal motives. And, and a common man suffered. In last decade of this 21st century, we have seen many examples of mismanaged economic system, frauds and corruptions.

We felt a need to reform our system in the beginning of second half of 20th century, and we passed first decade of 21st century with no confirmed strong system, and now when an old man has initiated and ignited the zeal to restore this reform in youth of India, some of us have started allegations and blame-games.

Technically speaking we definitely need to have a stronger system, and we need a spiritual reform of our man-kind to have our nation healthy, wealthy and prosperous.

Rotating night-shift working may lead to diabetes in working-women

Anna Hazare’s Mission and my mission