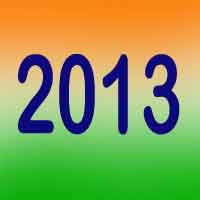 New Year’s Eve has always been a time for looking back to the past, and more importantly, forward to the coming year i.e. 2013.  It’s a time to reflect on the changes we want (or need) to make and resolve to follow through on those changes. I am highlighting some of things I would like to see in 2013 in India.

I would like to see enhanced level of security for every citizen in India – be it women, old peoples, children, everyone, and even foreigners and travellers visiting India.

I believe this the time when we should educate everyone about different aspects of life and society.

This is true that India has made progress in terms of increasing primary education attendance rate and expanding literacy to approximately two thirds of the population. India’s improved education system is often cited as one of the main contributors to the economic rise of India. Much of the progress, especially in higher education and scientific research, has been credited to various public institutions.

However, despite growing investment in education, 25% of its population is still illiterate.

If we can provide education and job to every Indian, we can change various socio-economic issues of India.

Unemployment is a major cause of evils in our society. If we just compare one-third of India’s population (roughly equivalent to the entire population of the United States) lives below the poverty line.

A 2007 report by the National Commission for Enterprises in the Unorganized Sector (NCEUS) found that 25% of Indians, or 236 million people, lived on less than 20 rupees per day with most working in “informal labor sector with no job or social security, living in abject poverty.

I would like to see such a positive economic development in India that every working person should have the job as per her/his capabilities.

Corruption in India is a major issue and adversely affects its economy. The causes of corruption in India include excessive regulations, complicated taxes and licensing systems, numerous government departments each with opaque bureaucracy and discretionary powers, monopoly by government controlled institutions on certain goods and services delivery, and the lack of transparent laws and processes.

I would like to see government efforts to reduce corruption across India.

Anna Hazare’s Mission and my mission