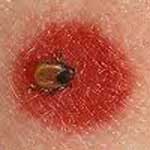 The US Health Department has reminded residents that the “deer tick” (black-legged tick) which causes Lyme disease is already active. Even immature ticks as small as a pinhead can transmit the disease. More ticks expected from mild winter, and the direct or indirect effects of global warming might intensify the prevalence of Lyme disease. With the unexpectedly early warm weather of the past few weeks, the insect world is in action well ahead of schedule. And with the flies, mosquitoes, and other interesting bugs, the deer tick has also once again come out of hiding.

Lyme Disease is an inflammatory disease caused by a spirochete (Borrelia burgdorferi) that is transmitted by ticks, usually characterized initially by a rash followed by flulike symptoms including fever, joint pain, and headache. If left untreated, the disease can result in chronic arthritis and nerve and heart dysfunction.

Lyme Disease was identified in 1975 and named for Old Lyme, Conn.

Lyme disease is the most common vector-borne disease in the United States. In 2002 alone, 23,763 cases were reported to the Centers for Disease Control and Prevention (CDC), a 40-percent increase over the number reported in 2001. According to the CDC, the actual number of Lyme cases may exceed 200,000 due to underreporting and limitations in disease surveillance methods. CDC statistics indicate that the largest proportion of Lyme disease cases occurs in children aged five to 14 years, and more than 50 percent of Lyme disease cases involve children under age 12. Although cases of Lyme disease have been reported in 49 of the 50 states, more than 95 percent of reported cases occur in just twelve states: Connecticut, Rhode Island, New York, Pennsylvania, Delaware, New Jersey, Maryland, Maine, New Hampshire, Minnesota, Massachusetts, and Wisconsin. In the United States, the Great Lakes region and the Pacific Northwest also have a higher incidence of Lyme disease. The disease is also found in Scandinavia, continental Europe, the countries of the former Soviet Union, Japan, China, and Australia.

The most recognizable indicator of Lyme disease is a rash around the site of the tick bite. Often, the tick exposure has not been recognized. The eruption might be warm or itch. The rash—erythema migrans (EM)—generally develops within three to 30 days and usually begins as a round, red patch that expands outward from the tick bite. About 80 percent of patients with Lyme disease develop EM. Clearing may take place from the center out, leaving a bull’s-eye effect; in some cases, the center gets redder instead of clearing. On children with dark skin, the rash may look like a bruise. Of those who develop Lyme disease, about 50 percent notice flu-like symptoms, including fatigue, headache, chills and fever, muscle and joint pain, and lymph node swelling. Many children with Lyme disease can develop neurologic symptoms within a few weeks following a tick bite. Neurologic symptoms in children with early Lyme disease include dizziness, stiff neck, unilateral or bilateral facial palsy, inflammation of brain membranes (a form of meningitis), knee and/or wrist arthralgia, tingling/numbness, sleep disturbance, and difficulties with memory, concentration, and learning.

Weeks, months, or even years after an untreated tick bite, symptoms can appear in several forms, including the following:

– fatigue, forgetfulness, confusion, mood swings, irritability, numbness
– neurologic problems, such as pain (unexplained and not triggered by an injury), Bell’s palsy (facial paralysis, usually one-sided but possibly on both sides), a mimicking of the inflammation of brain membranes known as meningitis fever, and severe headache
– arthritis (short episodes of pain and swelling in joints) and other musculoskeletal complaints (Arthritis eventually develops in about 60 percent of patients with untreated Lyme disease.)

In adults, less common effects of Lyme disease are heart abnormalities (such as irregular rhythm or cardiac block) and eye abnormalities (such as swelling of the cornea, tissue, or eye muscles and nerves). However, children with Lyme disease frequently complain of chest pain and have papilledema (swelling of the optic nerve). In addition, children with late-stage Lyme disease are more likely than adults to have fever and joint swelling and pain.

Ronald D. Whitmont, M.D. of US says “The cornerstone of homeopathic medical treatment is understanding the way in which the illness manifests itself through changes in a particular individual’s health. The history provides the foundation with which to understand the individual patient, making it possible to comprehend how the disease manifesting in each given case constitutes a change from that person’s pre-morbid state.

The classical homeopathic prescription is based, not on the diagnosis of Lyme disease per se, but on this personalized understanding of the characteristic form of disease expression in that individual host; the particular way this individual has departed from his or her own pre-morbid normalcy.

Understanding this point is critical, since it marks the divergence of homeopathy from conventional allopathic treatment. One cannot practice homeopathy effectively or be true to homeopathic principles if one fails to utilize this methodology.

Classical homeopathic treatment of Lyme disease can only be undertaken after a thorough analysis of an individual who is affected by a disturbance in their health. Since illness manifests uniquely in each individual, effective treatment must follow the same guidelines.”

Dr. Will Taylor, MD says “If we collect the common symptoms of Lyme disease from reports in the conventional medical literature, we can begin to construct a group anamnesis of the disease, in order to identify the most likely remedies for the disease genus.”

The classical target-rash of Lyme disease is not described in our homeopathic literature. The closest description we can find is:

– which can reasonably be expected to include remedies capable of covering the erysipelas-like Lyme target rash.

The arthralgias of Lyme most commonly begin with rheumatic pain in the neck, with associated headache:

The arthralgias focus in the shoulders, hips and knees, and may be of acute and/or chronic nature:

The neuralgias are most typically facial or sciatic:

There is a characterizing uniqueness in the concomitance of heart symptoms with the arthralgias and neuralgias, with the potential for inflammatory rheumatic myocarditis and/or pericarditis:

An important aspect of the “pace” of Lyme disease, is the migratory nature of its arthralgias/neuralgias, and the rapid change and alternation of symptoms:

We can take these common symptoms of Lyme disease, obtained from the population affected and treated as if of one person; and repertorize this list, to find:

The algorithms used in the Vithoulkas Expert System bring out Ledum as the remedy bearing closest similitude to this group anamnesis. Kalmia and Rhododendron make good showings in this analysis as well. Leading the list of “very small remedies” here is Gaultheria procumbens (wintergreen, teaberry) – a fourth member of the Ericaceaid family.

“Only 3 of these – Ledum, Rhododendron, and Kalmia – are reasonably represented in our literature. Gaultheria procumbens has been only poorly characterized, principally from its empiric use in the Eclectic and botanical medical traditions, with a fragmentary proving in crude/toxic dose” says Dr. Will Taylor, MD.

Dr. Cindee Gardner is a internationally renowned Homeopathic Consultant with over 28 years of experience in the field of natural medicine.

Dr. Cindee says “I have found that using Homeopathic remedies in conjunction with corresponding herb combinations can greatly accelerate the immune response of a person infected with Lyme’s disease.”

“Let me give a practical example of adding combination herbs to accelerate the healing process. A patient who showed severe, chronic Lyme symptoms was repertorized as having Cimicifuga or Arnica as his chief remedies. To those remedies I added herbs that also help with the same specific symptoms as the remedies that treated his chief complaint, here a chronic aching and soreness, such as Ashwangha, Black Cohosh, Wood Betony, and Kava. Or, for a person suffering from Bells Palsy as a result of a tick bite, I suggested use of the remedy Causticum during the protocol, and specific antispasmodic herbs like Melilotis, and Prickly Ash Bark as the treatment progressed” revealed Dr. Cindee of US.

Darien Gardner of Northampton, MA says “On February 23, 2007, my classical homeopath gave me a single high-potency dose of Borrelia Burgdorferi (a homeopathic remedy prepared from the bacteria that causes Lyme disease). She also recommended weekly acupuncture treatments and the immune-supporting herbs astragalus, echinacea, and goldenseal at certain times.

For about six weeks after I took the Borrelia remedy, I could feel my body fighting hard against the Lyme disease. I was able to carry on most of my normal activities, but I had some swollen glands, a very slight fever, headaches that would come and go, and periods of unusual fatigue. I reported these symptoms to my homeopath, who told me they were good signs of healing. And she was right. After a few weeks, the symptoms became less and less and gradually disappeared along with my original Lyme symptoms. In a few months, I was 90% better.

Within a year I could testify that I was fully recovered and have remained so. I am very happy with the outcome of my homeopathic treatment.”

Homeopathy for Prevention of Lyme Disease in dogs

Lyme disease affects not only humans but also domestic animals such as dogs, horses, and cattle that serve as hosts for the tick vectors. Animals affected show migratory, intermittent arthritis in some joints similar to that observed in humans.

Stephen Tobin, DVM of US says “I have been using Borrelia burgdorferi 60x nosode, a homeopathic preparation, as a preventative for Lyme disease in dogs. I give one oral dose daily for one week, then one dose a week for one month, then one dose every six months. In the past four years, I have had only two dogs our of over five hundred on this regimen contract Lyme disease; both cases readily cleared with Ledum. While I do not treat human beings, some of my clients with animals suffering from Lyme disease have taken Ledum 1M for their own lyme disease infections, after seeing the positive result with their animals. The feedback I have gotten is all positive.”

Peter Alex is a Naturopathic and Homeopathic Physician in Germany who has extensive experience in treating Lyme disease. Dr. Peter Alex says “The importance of this work, first published in German in 2005, cannot be overstated. In addition to the clarity of the author’s presentation on the usefulness of Homeopathy in the treatment of Lyme disease, we are also gifted with his insight into the nature of epidemic disease in general, our positive interrelationship with bacteria and the trouble that may result whenever we disregard nature’s laws. Written for the homeopath as well as the lay person interested in getting to the cause of illness, this book contains a wealth of philosophical information and cogent practical advice on the treatment and prevention of Lyme disease using homeopathy.”

Homeopathy as your mode of treatment