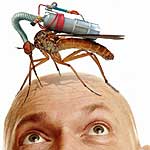 Dengue virus is primarily transmitted by Aedes mosquitoes, particularly A. aegypti. Humans are the primary host of the virus. A female mosquito that takes a blood meal from a person infected with dengue fever becomes itself infected with the virus in the cells lining its gut.

About 8–10 days later, the virus spreads to other tissues including the mosquito’s salivary glands and is subsequently released into its saliva. The virus seems to have no detrimental effect on the mosquito, which remains infected for life.

This is the life cycle of dengue virus. And, in a way, man infects dengue mosquito  😉

“Dengue life-cycle needs to be broken, as if the life cycle continues to persist then it will become an uncontrollable epidemic next year and homeopathy has the cheapest solution to eradicate dengue mosquito” said by Professor Dr Iftikhar Waris while talking to LCCI (Lahore Chamber of Commerce and Industry) President Irfan Qaiser Sheikh at the inauguration of Free Camp for Dengue established by a pharmacy and research centre.

Professor Dr Iftikhar Waris informed the LCCI President that the cure rate of deadly dengue virus with homeopathy was hundred percent therefore the government must concentrate on this mode of treatment instead of spending millions of dollars on the import of expensive sprays from other countries.

Speaking on the occasion, LCCI President Irfan Qaiser Sheikh said the Lahore Chamber of Commerce and Industry appreciated the research done by Professor Dr Iftikhar Waris and would extend every possible help so that the life-cycle of this deadly mosquito could be broken.