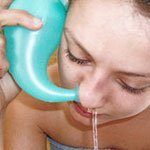 Nasal irrigation or nasal lavage or nasal douche is the personal hygiene practice in which the nasal cavity is washed to flush out excess mucus and debris from the nose and sinuses. Nasal cleansing began as an ayurvedic medicine technique and yoga in ancient India as Jal Neti or Jala Neti.

This sinus irrigation practice is generally well-tolerated and beneficial. Nasal irrigation in a wider sense can also refer to the use of saline nasal spray or nebulizers to moisten the mucous membranes.

A new study published in Clinical Infectious Diseases describes the first reported cases of primary amebic meningoencephalitis in the United States implicating nasal irrigation using disinfected tap water with Naegleria fowleri ameba in these infections. The study highlights the changing epidemiology of this uncommon disease, as well as the importance of using appropriately treated water for nasal irrigation.

Primary amebic meningoencephalitis is a very rare but usually fatal disease caused when water containing Naegleria fowleri amebae enters the nose, allowing the single-celled organisms to migrate to the brain.

In 2011, two fatal cases of the disease reported from Louisiana occurred in persons following nasal irrigation. This is the first time that contaminated tap water coming from a disinfected municipal water system has been linked to N. fowleri infections in the United States.

A secret to have heart-attack free life – strawberries and blueberries