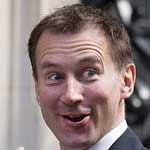 Jeremy Hunt has been appointed health secretary in the cabinet reshuffle. In 2007 Hunt backed an early day motion praising the ‘positive contribution’ homeopathic hospitals made to the NHS.

Jeremy Hunt’s views on abortion and homoeopathy have made him a controversial figure to appoint as Health Secretary.

Homeopathic medicine can be effective in the treatment of both acute and chronic illnesses and seeks to cure the underlying cause of the illness, whereas conventional medicine often treats the symptoms.

Let’s imagine, for instance, that you have seasonal allergies. Your physician prescribes one of the popular antihistamines that doesn’t cure your allergies, but rather just suppresses your symptoms. Your sneezing, runny eyes and coughing might go away, but you may be left with drowsiness, fatigue or dryness. Your homeopath, on the other hand, will prescribe one or more remedies – ones that will address and alleviate your symptoms but also will strengthen and balance your immune system so that your allergies don’t reoccur.

The critical factor in homeopathic treatment is individualizing the remedies prescribed. Not every patient will receive the same remedy even if, for example, they have a cold caused by the same germs that their friend has. This is because each body, each immune system, manifests its “dis-ease” in its own subtle ways, and remedies are prescribed on the basis of these subtleties, not on the medical diagnosis.

Well, Hunt’s personal beliefs shouldn’t influence policy because his job will mostly be to implement reforms that have already been agreed. Still, British media slammed Hunt’s appointment, mainly basing their criticism on his support of homeopathy.

I am sure with Jeremy Hunt’s appointment may spark a new debate on homeopathy in UK, and with some ridiculed opposition, HOMEOPATHY would stand firmly in UK as in India.

Enjoy your rapid, gentle and permanent restoration of the health 🙂