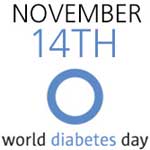 World Diabetes Day raises global awareness of diabetes – its escalating rates around the world and how to prevent the illness in most cases. Started by the International Diabetes Federation (IDF) and WHO, the Day is celebrated on 14 November to mark the birthday of Frederick Banting who, along with Charles Best, was instrumental in the discovery of insulin in 1922, a life-saving treatment for diabetes patients.

WHO estimates that more than 346 million people worldwide have diabetes. This number is likely to more than double by 2030 without intervention. Almost 80% of diabetes deaths occur in low- and middle-income countries.

At present, type 1 diabetes cannot be prevented. The environmental triggers that are thought to generate the process that results in the destruction of the body’s insulin-producing cells are still under investigation.

Type 2 diabetes, however, can be prevented in many cases by maintaining a healthy weight and being physically active. Studies in China, Finland and the United States have confirmed this.

Once identified, people at high risk of diabetes should have their plasma glucose levels measured by a health professional to detect Impaired Fasting Glucose or Impaired Glucose Tolerance, both of which indicate an increased risk of type 2 diabetes. Prevention efforts should target those at risk in order to delay or avoid the onset of type 2 diabetes.

There is substantial evidence that achieving a healthy body weight and moderate physical activity can help prevent the development of type 2 diabetes. In primary prevention there is an important role for the diabetes educator to help people understand the risks and set realistic goals to improve health. IDF recommends a goal of at least 30 minutes of daily exercise, such as brisk walking, swimming, cycling or dancing. Regular walking for at least 30 minutes per day, for example, has been shown to reduce the risk of type 2 diabetes by 35-40%.