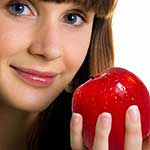 An apple a day keeps the doctor away, and now eating an apple a day might in fact help keep the cardiologist away, new research suggests. In a study of healthy, middle-aged adults, consumption of one apple a day for four weeks lowered by 40 percent blood levels of a substance linked to hardening of the arteries.

Taking capsules containing polyphenols, a type of antioxidant found in apples, had a similar, but not as large, effect.

The study, funded by an apple industry group, found that the apples lowered blood levels of oxidized LDL — low-density lipoprotein, the “bad” cholesterol. When LDL cholesterol interacts with free radicals to become oxidized, the cholesterol is more likely to promote inflammation and can cause tissue damage.

“When LDL becomes oxidized, it takes on a form that begins atherosclerosis, or hardening of the arteries,” said lead researcher Robert DiSilvestro, professor of human nutrition at Ohio State University and a researcher at the university’s Ohio Agricultural Research and Development Center. “We got a tremendous effect against LDL being oxidized with just one apple a day for four weeks.”

The difference was similar to that found between people with normal coronary arteries versus those with coronary artery disease, he said.

DiSilvestro described daily apple consumption as significantly more effective at lowering oxidized LDL than other antioxidants he has studied, including the spice-based compound curcumin, green tea and tomato extract.

“Not all antioxidants are created equal when it comes to this particular effect,” he said.

DiSilvestro first became interested in studying the health effects of eating an apple a day after reading a Turkish study that found such a regimen increased the amount of a specific antioxidant enzyme in the body.

In the end, his team didn’t find the same effect on the enzyme, but was surprised at the considerable influence the apples had on oxidized LDL.

For the study, the researchers recruited nonsmoking healthy adults between the ages of 40 and 60 who had a history of eating apples less than twice a month and who didn’t take supplements containing polyphenols or other plant-based concentrates.

In all, 16 participants ate a large Red or Golden Delicious apple purchased at a Columbus-area grocery store daily for four weeks; 17 took capsules containing 194 milligrams of polyphenols a day for four weeks; and 18 took a placebo containing no polyphenols. The researchers found no effect on oxidized LDLs in those taking the placebo.

“We got a tremendous effect against LDL being oxidized with just one apple a day for four weeks.”

“We think the polyphenols account for a lot of the effect from apples, but we did try to isolate just the polyphenols, using about what you’d get from an apple a day,” DiSilvestro said. “We found the polyphenol extract did register a measurable effect, but not as strong as the straight apple. That could either be because there are other things in the apple that could contribute to the effect, or, in some cases, these bioactive compounds seem to get absorbed better when they’re consumed in foods.”

Still, DiSilvestro said polyphenol extracts could be useful in some situations, “perhaps in higher doses than we used in the study, or for people who just never eat apples.”

The study also found eating apples had some effects on antioxidants in saliva, which has implications for dental health, DiSilvestro said. He hopes to follow up on that finding in a future study.

The study was conducted as a Master’s thesis by graduate student Shi Zhao, and was funded by a grant from the U.S. Apple Association/Apple Product Research and Education Council and a donation from Futureceuticals Inc. of Momence, Ill.

Also involved in the study were associate professor Joshua Bomser and research associate Elizabeth Joseph, both in the Department of Human Nutrition, which is housed in the university’s College of Education and Human Ecology.

So, remember — An apple a day for four weeks lowers 40 percent of LDL bad cholesterol.

7-a-day for happiness and mental health

Omega-3 and aggressive behavior in children