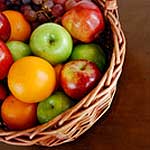 Happiness and mental health are highest among people who eat seven portions of fruit and vegetables a day. This is roughly 500 grams of fruits and vegetables everyday. Economists and public health researchers from the University of Warwick studied the eating habits of 80,000 people in Britain.

Researchers found mental wellbeing appeared to rise with the number of daily portions of fruit and vegetables people consumed. Wellbeing peaked at seven portions a day.

The research was carried out in conjunction with Dartmouth College in the USA and is due to be published in the journal Social Indicators Research.

Most western governments currently recommend ‘5 a day’ for cardiovascular health and as protection against cancer risk.

In Britain today, a quarter of the population eat just one portion or no portions of fruit and vegetables per day. Only a tenth of the British population currently consume the magic number of seven or more daily portions. The study does not distinguish among different kinds of fruits and vegetables and it defines a portion as approximately 80 grams.

Study co-author Professor Sarah Stewart-Brown, Professor of Public Health at Warwick Medical School, said “The statistical power of fruit and vegetables was a surprise. Diet has traditionally been ignored by well-being researchers.”

She emphasized that much remained to be learned about cause-and-effect and about the possible mechanisms at work, and that randomized trials should now be considered.

Fellow co-author, economist Professor Andrew Oswald from the Centre for Competitive Advantage in the Global Economy (CAGE) in the Department of Economics at the University of Warwick, said: “This study has shown surprising results and I have decided it is prudent to eat more fruit and vegetables. I am keen to stay cheery.”

The study ‘Is Psychological Well-being Linked to the Consumption of Fruit and Vegetables?’ by David G. Blanchflower, Andrew J. Oswald, and Sarah Stewart-Brown.

Enjoy your best health with fruits and vegetables.

Iron in our diet – dietary sources of iron

Excessive vitamin D supplements may be harmful to you